A century and a half ago toward the close of the War between the States a part of that conflict played itself out as a Kulturkampf, a cultural war. The South had described themselves as gentlemen and offspring of those called Cavaliers during the English Revolution. The Yankees, by contrast, were declared to have been but tradesmen descended from the Puritan Roundheads In the closing years of the War, the Committee on Heraldry of the New England Historic Genealogical Society struck back. The Committee published a quarterly journal called the Heraldic Journal and for four years it dutifully placed in print the extant relics of heraldry in New England. The Committee’s object was not merely scholarly. They also intended to do their part in the battle for public opinion by proving that many a colonial New Englander was a gentleman and, withal, a gentleman of coat armor.

Part of this effort was a serialized article entitled “New England Baronets”. While few colonial Americas could boast a peerage, the number of settlers or sojourners in America who were members of the sixth hereditary degree, the baronetage, was surprisingly larger. What follows is an enlarged and expanded account of tile story of the baronets of New England.

Most of these baronets are listed on the New England Roll of Arms, a register of Americans of coat armor published periodically since 1928 by the Committee on Heraldry in the New England Historic Genealogical Register Some baronets were Founders and one even refrained from taking up arms against the Patriots during the American Revolution. We hope that this bit of history of colonial New England will prove as interesting to the members of this Order as it did to the readers of the Heraldic Journal a century and a half ago.

The British peerage with its dukes, marquesses, earls, viscounts and barons is a medieval creation. By contrast, the baronetage is a modern invention. The “sixth hereditary degree”, the baronetage, goes back merely to 1611, to the impecunious days of King James I of England, who, needing money to effect the English colonization of Ulster, devised tile baronetage. King James proposes{ to create 200 ) baronets from among gentlemen of suitable estate and lineage. The recipients of the new, title of “baronet” were to pay for the upkeep for three years of thirty infantrymen in Ulster to repel the Irish rebels there or to pay to the king’s exchequer £1095. A further £1200 had to be paid as fees for tile various officials expediting of tile letters patent.

The baronets were a species of hereditary knight; the incumbents got tile title of “Sir” and would have precedence after barons’ younger sons, and their eldest scan would have tile right to a knighthood at the age of twenty-one. Besides tile title and the precedence that it conferred the baronet of England was entitled to add to his coat of arms, as an armorial augmentation of honor, a “canton of Ulster”, which is to say a red hand couped at the wrist and borne on a silver canton. It was this last baronetical privilege in taut that justified the interest placed upon the subject of the Nov England baronets by the Committee of Heraldry.

In an initial flurry of excitement 17 “gentlemen of first quality” stepped forward to receive their baronetical patents. Thereafter, interest waned and between 1612 ad 1614 the price of a baronetcy fill to £666 The economic dislocation set in train by the failure of Alderman Cockayne’s scheme to corner the woolen market and the onset of the Thirty Years’ War depressed the price of a baronetcy even further after 1619 to £200 and it was said that some persons of less than “first quality” now received patents. In 1623 the Court of the Earl Marshal accused a Shropshire baronet and draper of “baseness and other bad qualities” and he was “declared and pronounced no gentleman” by the court in a default judgment. In 1619 King James further exacerbated the oversupply situation by creating the new order of baronets of Ireland with privileges identical to those of the baronets of England. His son Charles I’s financial exigencies, moreover, lead him to exacerbate the situation even further by breaching the limit of 200 English baronets promised by his father; in the course of his troubled reign the son added 158 new members to the baronetage.

In 1625 Charles I further enlarged the oversupply by creating a Scottish order of baronet modestly to be limited to 1511 members. They were at first called the “Knights Baronets of Scotland and Nova Scotia”. Their function was to finance the settlement of Scotland’s North American province of Nova Scotia and until 1638 each baronet of Nova Scotia received with his letters patent ,n grant of 16,000 acres in that North American province, which then extended from Newfoundland to the Sainte Croix River and thus included a slice of what today is the State of Maine Later opened to English and Irish families the Scottish baronetical order included the solitary baronetess, the Yorkshirewomen Dame Mary Bolles Besides the privileges enjoyed by the English and Irish baronets, the Scottish baronets could wear from an orange tawny heck ribbon a badge consisting of the arms of Nova Scotia, i.e. the Royal Arms of Scotland on an inescutcheon upon a blue saltire on a silver field. The Scottish baronets were privileged to augment their arms with this badge, suspending it from the shield.

A few men born in or associated with New England became baronets. To Massachusetts Bay in 1636 immigrated Sir Henry Moody (c. 16117-61), second baronet of Garesdon, Wiltshire, since the death in 1629 of his father, the first baronet. Educated at Oxford he settled in Lynn and later Salem, Massachusetts, where in 1640 his mother Deborah, Lady Moody, became a member of the First church of Salem. But soon this noted Noncomformist who refused to accept infant baptism and is accounted an early Quakeress was induced to remove with her son to Gravesend Long Island. There they quietly lived under more broadminded Dutch rule. They and their several associates in 1644 received a patent of land from Dutch Governor Krieft of New Amsterdam. After his mother’s death and perhaps because of the Anglo-Dutch War, Sir Henry removed to Virginia where he died sine prole on 20 September 1661. His arms appear as #274 on the New England Roll and are blazoned or described in heraldic parlance as Vert a fesse engrailed Argent surmounted by a bar Gules between three harpies of the second crined Or. 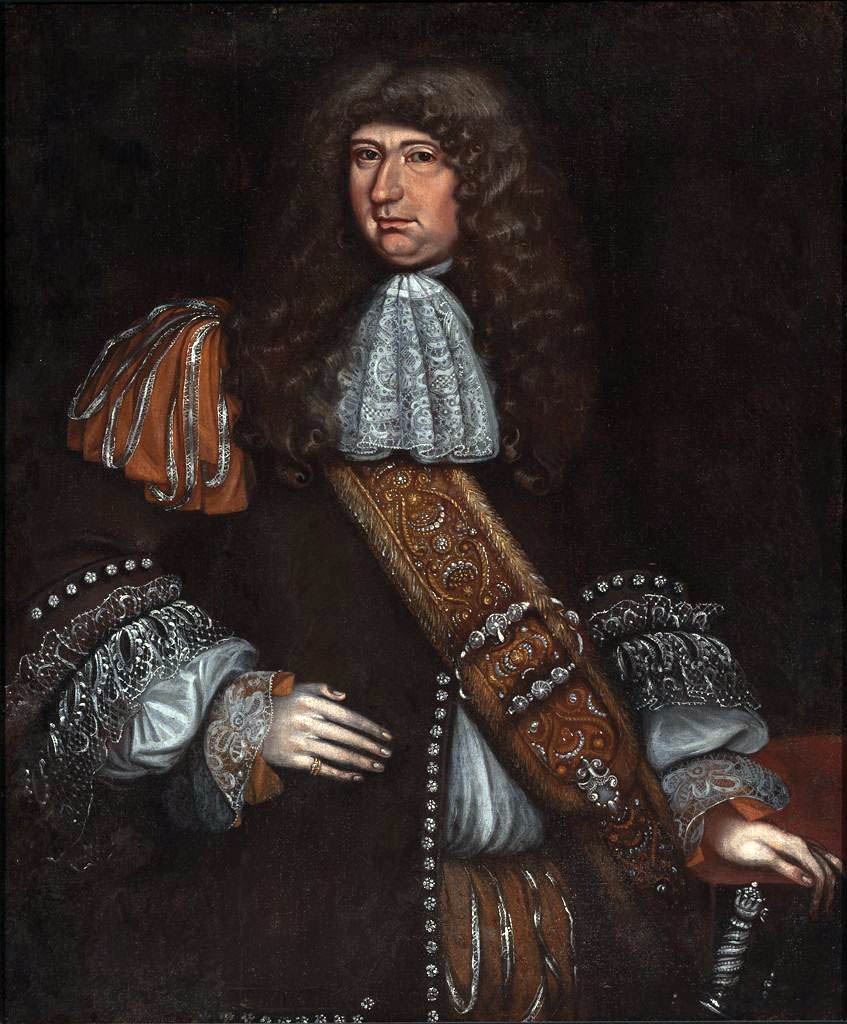 In Massachusetts also lived George Downing (1623-84), who was the son of Massachusetts Founder, Emmanuel Dowvning, who had married Lucy, sister of Massachusetts Founder and Governor, John Winthrop. George graduated from Harvard in 1642 and became chaplain in Okey’s regiment in England during the English Revolution and he later served as minister resident and envoy to the Hague for Cromwell. After the Restoration he continued to prosper and became Secretary of the Treasury, one of the Tellers of the Exchequer, and a Commissioner of the Customs Created a baronet on 1 July 1673, he died in 1684. He made a tidy fortune in real estate speculation and I Downing Street in Whitehall is named after this Harvard baronet. I Downing College at Cambridge was founded by one of Iris descendants. The Downing arms are listed as #131 on the New England Roll and are a golden griffin on a field barry of eight Argent and Vert.

John Davie of New London and Groton, Connecticut, succeeded to a baronetcy in 1706. The family was originally from Devonshire and in 9 September 1641 John Davie (1589-1654) of Creedy, County Devon, having sons John, William, Robert and Humphrey, was made a baronet. The last son came to New England, settling in Billerica, Massachusetts Bay, where he married Mary, daughter of Edmund White. He because a member of the Ancient and Honorable Artillery Company of Massachusetts in 1664 and served as an Assistant in the Massachusetts upper house from 1679 to 1686. In 1687 he removed to Hartford, Connecticut, where he died in 1689. His son John graduated from Harvard college in 1681 and settled in Groton, Connecticut, until he succeeded as fifth baronet. Thereupon Sir John went to England with his wife, Elizabeth Richards, and his three sons and three daughters to claim his title and his estates. The arms of Davie appear as #150 on the New England Roll and are a black chevron between three pierced red stars on a silver field.